Children’s education is a sensitive issue, as parents do the best they can and know, although sometimes they don’t realize that they may be making some mistakes.

Adults are experts at judging without realizing it and, precisely due to this reason, you may be judging your children without being aware of it.

This post’s objective is to offer you some clues so you can assess whether you’re judging your children or not. And what you can do to stop it.

Nobody teaches us to be parents, and we only have our experience as children as reference.

Usually, if you spent your childhood under an authoritarian educational style, you’ll want to do something completely different with your child, and give him all the love that your parents didn’t give you.

Or if your parents didn’t help you with your problems, you may now want to support your child’s every need, so he won’t feel as lonely as you did.

And it’s okay to want to overcome the shortcomings you had in your childhood, but you have to be careful. The opposite may happen. That is, you may go from authoritarianism to hyperprotection.

And that’s not good for children either.

Education involves helping a child to become independent and autonomous.

A trial helps determine, based on reason, whether someone or something that has happened is positive or negative for someone, or for yourself.

As soon as we’re introduced to someone, and without knowing it, we make a positive or negative first impression.

This also happens with situations, we judge a situation as positive or negative based on our interpretation of reality.

This judgment is usually unconscious and we judge both other adults and children.

What happens is if I tell an adult:

He may look at me, with a poker face and, perhaps, even answer:

“What do you base that one?”

“You’re also a fool, and you haven’t noticed.”

An adult has the capacity for discernment, which allows him to assess whether what he’s been told is true or not.

However, children don’t have this ability, and they consider that those words or phrases they receive from their parents, older siblings, educators or important people in their life, are indisputably true.

When judgment becomes an identity

The problem with children’s education is that the child is judged by his actions.

What the child has done wrong is an action and yet the person is being judged by the word “you”.

He isn’t being told: “you have been mistaken, you have to do it in a different way”, he’s being judged by his way of being.

And that’s the danger, to incorporate the judgment as part of his or her identity.

Because the phrase “you’re a fool”, that as a parent or mother, you can express without any bad intention and almost without giving it much importance, is important for a child who is forming his self-identity, that is, the idea he or she has of himself.

Another example of judgment is when a child cries and is told: “you are so weak” or “you always cry about everything”.

It re-judges the act of “crying” because the person “is weak.”

Remember that the child, who has no filter to verify whether or not this statement is true, will take it as true, and will include it as part of his identity.

Of course, this doesn’t happen if we say it once.

But every time we include a judgment, we’ll help them positively or negatively to build the idea that he or she is forming of him or herself.

The difference between the Self and Being (or Doing)

In children’s education it’s very important to differentiate the person (the self) from what he does (doing) or how he is at that moment (being).

If the child cries, his tears must be accepted as any other feeling, and the act of crying shouldn’t be judged as a sign of weakness.

Crying is one more feeling, like laughing, being scared or angry.

The child is “sad” and what he “does” is cry. This has nothing to do with him being one way or another. Do you see?

If the child is wrong, he’s been wrong in his way of acting, but we can give a more constructive message, such as:

“You have to practice more”

But don’t judge him as dumb or useless, because that will limit him.
Sometimes, it isn’t easy to stop judging, because we judge ourselves constantly.

Have you ever “caught” yourself telling yourself, “What a fool you are”? Or “how clueless can you be?”

Start being careful with what you tell yourself, and it’ll be easier to not judge your child’s education. Remember that you are their role model, and just as you treat yourself, you’ll treat others.

If you learn to stop judging yourself, you’ll also stop doing it to your children, and you’ll improve their self-esteem and yours.

So, start with yourself!

Share on FacebookShare on WhatsAppShare on PinterestShare on LinkedInShare on Telegram

This website uses cookies to improve your experience while you navigate through the website. Out of these, the cookies that are categorized as necessary are stored on your browser as they are essential for the working of basic functionalities of the website. We also use third-party cookies that help us analyze and understand how you use this website. These cookies will be stored in your browser only with your consent. You also have the option to opt-out of these cookies. But opting out of some of these cookies may affect your browsing experience.
Necessary Always Enabled
Necessary cookies are absolutely essential for the website to function properly. This category only includes cookies that ensures basic functionalities and security features of the website. These cookies do not store any personal information.
Non-necessary
Any cookies that may not be particularly necessary for the website to function and is used specifically to collect user personal data via analytics, ads, other embedded contents are termed as non-necessary cookies. It is mandatory to procure user consent prior to running these cookies on your website.
SAVE & ACCEPT

3 foolproof steps to Learn to Say No 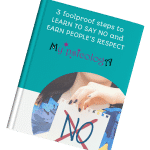 Responsible: Miriam Esquivel Blanco, being the Purpose: sending my publications, promotions of products and/or services and exclusive resources. Legitimation is thanks to your consent. Recipients: your data is hosted on the servers of my email marketing platform Active Campaign. See active campaign privacy policy. You can exercise your rights of access, rectification, limitation or delete your data in info@miriamesquivel.com. For more information, see our privacy policy.